HEKTAŞ IS AMONG THE COMPANIES THAT SPEND THE MOST R&D!

NewsHEKTAŞ IS AMONG THE COMPANIES THAT SPEND THE MOST R&D! 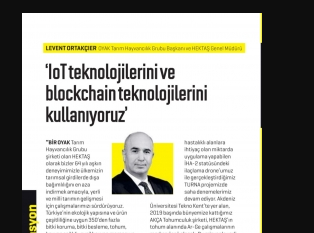 HEKTAŞ IS AMONG THE COMPANIES THAT SPEND THE MOST R&D!

HEKTAŞ ranked 24th in fortune turkey’s ranking of “Companies that spend the most R&D compared to sales revenue in the first 6 months of 2020”. “In its responsibility as a OYAK group company, we believe that the future of our country and agriculture will be built on solid foundations thanks to R&D activities and we continue our work in this direction,” said M. Levent Ortakçıer stated that HEKTAŞ will continue its R&D projects that make a difference tomorrow as it does today and will contribute to the producers and the country’s economy.

Hektaş, which increases its presence and power in all inputs of agricultural production day by day, is working to bring the Turkish producer to the point where it can compete with the world by producing new agricultural technologies with R&D-oriented investments and collaborations in the agricultural sector where OYAK operates with its importance and vision for R&D.

Hektaş Smart Assistant mobile application, developed by HEKTAŞ engineers and supported by artificial intelligence, which allows manufacturers to detect diseases in crops up to 95 percent from the photos taken with their smartphones in the field, can implement the UAV-2 status spraying drone (TURNA project) with blockchain infrastructure, which can apply as much as needed to diseased areas detected in the field with remote sensing and imaging, image processing and analysis systems. The “Safe Food Platform” to be passed stands out as the most important outputs of R&D studies.

“While developing projects where we use artificial intelligence and IoT technologies to make our producers produce more efficiently, we also use blockchain technology to increase the agricultural literacy of end consumers,” said M, president of OYAK Agricultural Livestock Group. Levent Ortakçıer; “With our “Safe Food Platform” project, we will bring traceable products produced in smart greenhouses to the consumer. Consumers can read the square codes on product packaging with a mobile app; they will be able to follow all the curious details such as which producer produced the product where, which seed, which plant protection and plant feeding products were used, when they were harvested and when they reached the supplier and the grocery shelf.”